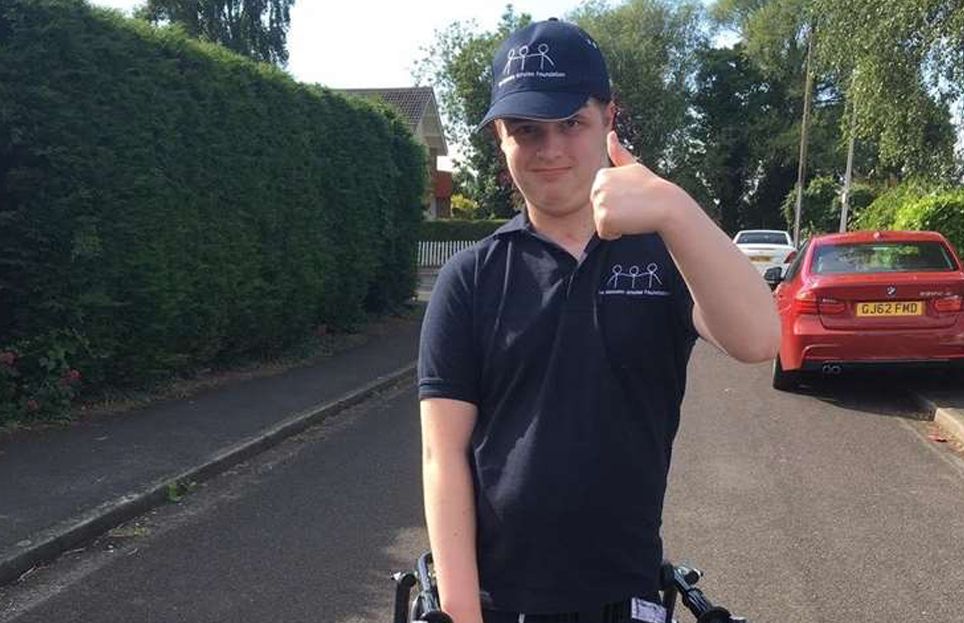 A teenager who suffered a devastating bleed on the brain is on the road to recovery after receiving a new walking frame.

Ryley Briston, of Baston, was just 14-years-old when he collapsed following a football game with friends. That was in May 2016. Up until then, he had been a fit and healthy teenager who loved sport and played football for a local team and was a keen athlete. He also took part in athletics, football and rugby at his school at Bourne Grammar. Scans at Addenbrooke’s Hospital in Cambridge, revealed he had an AVM (Arteriovenous Malformation) in his brain which had haemorrhaged, causing a bleed.

To save his life, he underwent emergency surgery to stem the bleed and remove a large part of his skull.The brave teen was placed in an induced coma to allow his brain to recover and spent three months at Addenbrooke’s, where he had to relearn how to talk and eat.

His injury left him with long-term upper body dystonia, meaning he can’t walk very well and use his hands and arms effectively. He also uses an electronic communication system although his speech is improving.

And thanks to a donation of just over £1000 from The Malcolm Whales Foundation, a new Kaye walker has been purchased to help Ryley get back on his feet – quite literally.

His proud mum Mel said: “The more Ryley is on his feet the quicker his brain will develop new pathways giving him a better chance of recovery. Ryley has recently started a new school and already he has begun to walk to one lesson a day using his walker. Ryley is making huge progress in all areas relearning the skills many of us take for granted in daily life. The key to his progression is getting the right therapy and equipment to help him reach his full potential and his dream of walking again independently.”

“We are delighted that Ryley has made such amazing progress with his walker. When we were approached to support him, it was a very straightforward decision.

We are delighted that Ryley has made such amazing progress with his walker. When we were approached to support him, it was a very straightforward decision. We hope that the walker continues to make a big difference to Ryley and his family.”
Damien Whales

Back to Who We Support