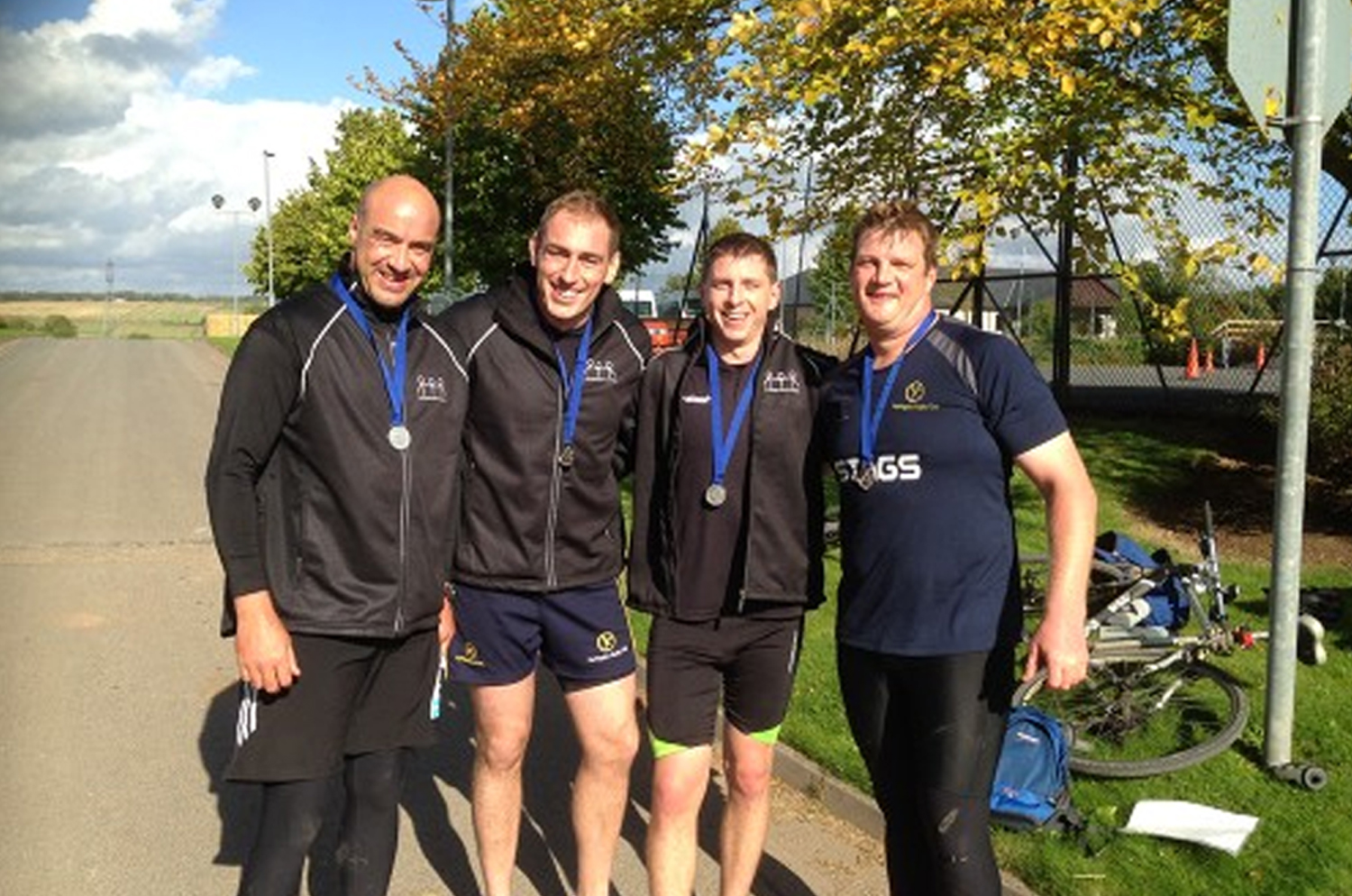 On the 30th August 2014 Damien Whales, Dougie ‘Downhill’ Bentley, James Thorpe and Tad Chapman competed in the 2014 Race the Sun. A Charity race that required teams of 4 to cycle 24 miles, climb Helvellyn, canoe Lake Thirlmere and then cycle 26 miles back to Penrith.

Is it as flat in the Lake District as it is in Cambridgeshire? NO
Can you fit 3 grown men into a Travel lodge room?  Yes
Does Carb Loading have a big impact? NO
Does the low gear on the bike have any use? YES
If one of the team doesn’t like riding his bike down hills or on bumpy paths, does this pose a problem? YES
Is Wayne’s bike road worthy? NO

Setting off at 6.54am the team left Penrith nervous, excited and wearing ‘leggings’. Team 55 were up and running. After about 3 miles of nice country roads things became a little more serious. I was lent over my bike barely able to breath contemplating whether breakfast needed to be deposited or whether to try and hang on in there! The Lake District is not flat! The training in Cambridgeshire may not have been as useful as previously thought. Although the team were making good time and passed a number of teams, it became very clear very quickly that we were not going to win (Road bikes go quite quickly on roads). Several teams decided to ignore the instructions not to use road bikes; this seemed to have made a lot of sense as it turned out.  45 miles of the 50 miles of cycling were on roads. Nonetheless we were going at a pretty good pace, so fast in fact that Tad felt the need to stop and remove his clothes?!

After about 15 miles of 1st gear we reached the ‘off-road’ part of the race. ‘Downhill Dougie’ was free! Doug attacked the all-terrain coach path like maniac. Surely we would destroy the rest of the field. The only things that got in his way were the bumpy tracks and the uphill and downhill parts. He was so brave that the only time he stopped was when it got ‘too scary’ for him and he had to get off and walk his bike gently down a slightly steep hill with a few little rocks! (We were happy waiting at the bottom for him!!) Maybe we can still win?

Helvellyn, this sounds fun! After 24 miles of mountain biking, I know lets climb a mountain. It started well, after 10 mins Thorpe looked like he was about to go into Cardiac Arrest. He spent the next 3 ½ hours of his life in a very happy place! I spent the 3 ½ hours with the mountain rescue on speed dial ready to come and put him out of his misery!

Having climbed to the peak and achieved a major part of the challenge, 3 of the team took a moment to take in the views. Thorpe was offered the chance to be part of the ‘moment’. He politely declined with a range of grunts, tears, swear words and something to do with potatoes. We reached the bottom having walked down about 10,000 stone steps. Our legs no longer felt our own and we were now making our way to the canoe point.

Lake Thirlmire, 40 mins in a canoe, again sounds fun! Safe to say I hated every single minute of the 40. Tad suffered mild concussion from Doug’s windmill approach. Thorpe’s ears began to bleed from my swearing and moaning. We canoed to a rock, turned round and canoed back. ****!

Back on the bikes! 26 miles left. We were nearly there!! ‘There’ has never felt so far away! Legs were now really beginning to hurt. ‘Downhill’ however began to grow in confidence, it was even noted that he went down a couple of hills without his brakes on. Tads ‘Apollo’ was beginning to test his state of mind. Tad demonstrated a real strength of character as the bike and lack of prep began to challenge him both physically and mentally. Apart from one minor breakdown however and the ridiculous shoes, Tad did exceptionally well.  Doug now began to power towards the finish! What about Thorpe? Thorpe’s brand new bike now started to experience a few teething problems! The gears that you need to climb hills no longer seemed to work for him. For Thorpe, this presented a problem. For us it provided much needed light entertainment. As every hill from there on in, resulted in swearing, grunting and deafening bear like growls! We obviously comforted him and offered our sympathy by leaving him behind. We clearly wanted the teamwork prize!

After 9hrs 45mins we crossed the finish line! The sense of achievement and the other nonsense that people say you feel wasn’t there. All I could think was, ‘thank **** that is over’!

On a slightly serious note, I would like to thank James, Doug and Tad for being part of the team. We achieved something that will remain in all our minds forever. Overall we finished a very respectable 16th out of 85 teams. We have raised just over £3500 for Action Medical Research and the Malcolm Whales Foundation. I expect this figure to exceed £4000 by the time we have finished collecting the money. A fantastically well organised event for a very good cause!

I think I speak for all of us involved, when I thank everybody that sponsored us! There are so many requests to constantly sponsor various events. However with all your kind donations it has enabled us to exceed our target and I hope make a difference to many people’s lives.

Many thanks
Damien, Doug, James, Tad and The Malcolm Whales Foundation