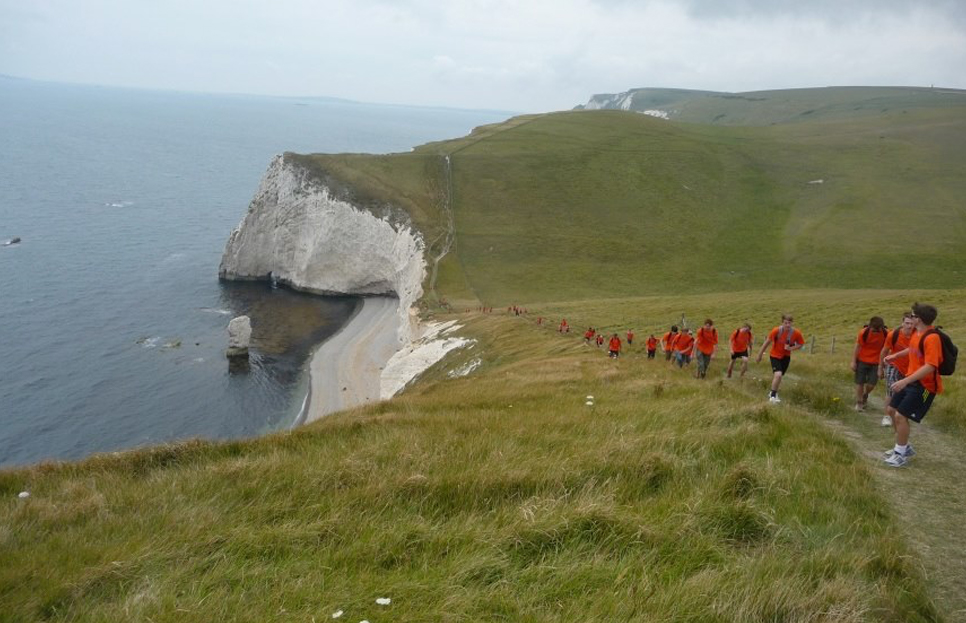 On the 14th July 2011 64 staff and students from the City of Ely and Prince William set off for the Jurassic Coastline, Dorset.

This is the third year that the ‘Malcolm Whales Dorset Walk’ has successfully taken place. Again this year we were walking and raising money for Bowel Cancer Research. Intent on building on the £25,000 we have managed to raise over the previous 2 years. The group this year consisted of several students taking part in their third walk and several new students across years 10-13.

The week leading up to the walk had consisted of a mad last minute rush for warm clothing and waterproofs. The Forecast predicting torrential rain for Thursday, Friday, Saturday and Sunday. Great news as Thursday was our arrival day, Friday, Saturday and Sunday we were walking 40 miles exposed to whatever elements were thrown at us. Early excitement was fast becoming apprehension as to what was in store for us.

Thankfully the Weather Forecast was as ever completely unreliable and most importantly wrong for much of the weekend! At 3.55pm Thursday 14th July Woodyhyde campsite was a peaceful and relaxing part of the Dorset countryside, located in the shadow of Corfe Castle. At 4.00pm it welcomed 4 minibuses, 1 Transit van and 50+ students aged between 14-18. The few resident campers faces where filled disbelief and trepidation at the mass of teenagers that had just arrived, fresh from 4 ½ hours sat down in minibuses!

Fully prepared with waterproofs in hand we again departed for Weymouth seafront and the start of our 40 miles. In our orange bowel cancer shirts the impact of our group was exactly as we had hoped as the group filled the promenade for the early stages of the walk. Heading East along the South West coastal path, day one is an excellent walk starting of with moderate climbs out of Weymouth before ascending and descending past Durdle door and finishing at Lulworth Cove.

Day two, we have now found the rain, the wind and October! Nearly every camper awoke complaining of a mild dose of hypothermia. Is it July? Leaving Lulworth cove in torrential rain we were about to undertake the most difficult days walking. The next 7 hours were looking a very bleak prospect. Fortunately the weather did improve during the day and although there were some very wet and tired bodies everybody made it. Admittedly some required a little more assistance than others, including piggy backs for the last ½ mile.

Walking is only part of the Dorset experience. During the evening students have a little time to let of steam. This usually consists of the students proving that it is impossible to tire them out! This year’s evening entertainment included a staff v’s student touch rugby match, needless to say the staff comfortably taking the honours!!

The touch rugby was however only the warm-up to the main event. Event 2, Staff v’s Students Cricket! This match even managed to attract spectators from around the campsite. I would love to say the game was played in a friendly atmosphere where taking part in itself was the prize. However this was definitely not the case, the match was ultra-competitive with more sledging then ever observed in the history of cricket. Again there was only going to be one result, the staff triumphing for the second time!

As day 3 began, rainy season had now been replaced with hurricane season. The wind was gusting and any cobwebs were soon blown away. The third leg is probably the most straightforward of the walk. The huge gradients are now replaced with some very picturesque views and some of the more popular tourist places including Durlston Head and Swanage. With the whole group walking in the same coloured shirts the impact was again very powerful. As we dodged in and out of the numerous groups of Morris Dancers on the Swanage Seafront, the end was only a couple of miles away.

As occurs every year as the finish came into view the pace began to increase! A finish line was drawn in sand an 64 walkers sprinted down the beach and across the line. Dorset 2011 was over for another year.

Again my thanks goes to all of the students who gave up their time and challenged themselves in the name of charity. The staff also who  give up their time to support the walk. I would again like to extend my thanks to Tony who is such an integral part of the walk. Without his assistance the event would be a very different challenge.

Last and not least a thank you to all of you have sponsored somebody on this event. As you can see we are achieving a massive amount of money for a very worthwhile cause.

Yet again every single student involved completed the walk. The amount positivity and levels of enjoyment proved yet again what the a success the event is! The sponsor money is now being collected and a final total will be counted.

With the objectives being to create an enjoyable event whilst raising awareness and money.  It is safe to say mission accomplished for a third successful year.