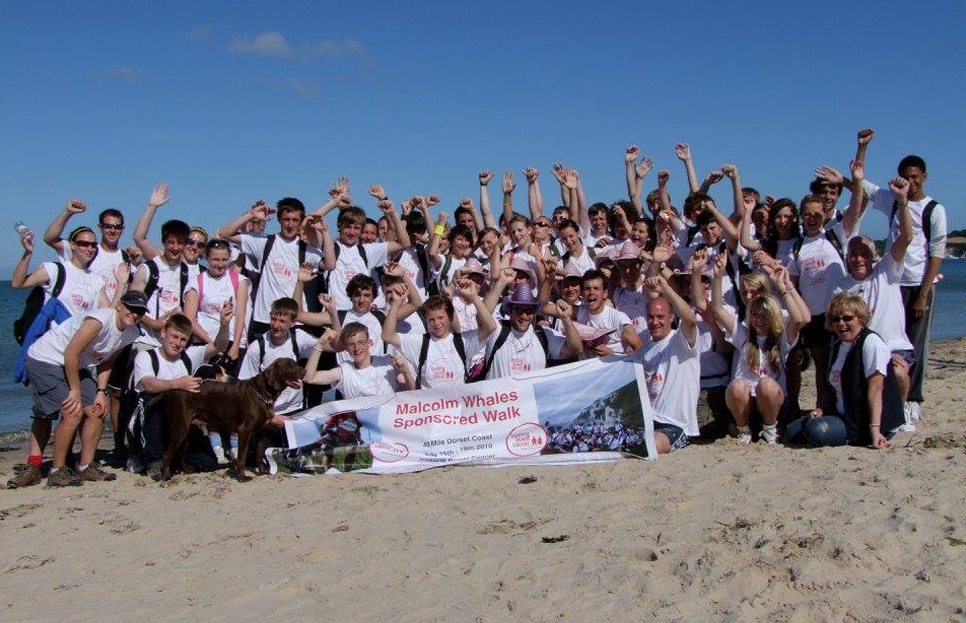 This year’s walk took place during mid-July, again the Dorset coastline was the venue for the event.

There were however a some changes to the event. This year Prince William school in Oundle joined the students from City of Ely, which meant in total we had 55 people participating this year. The increased numbers meant more students involved than ever before. Perhaps the most pleasing aspect of the walk was that there were so many students that were involved last year joining us again for another year.

The walk started well leaving Ely on time in good weather conditions. Our convoy of buses and support vehicles looking forward to the pleasure of M25 and M3! Our arrival in Dorset 5 hours later couldn’t have been better with tents being erected in perfect sunshine. The weather prediction for torrential rain and gale force winds at 4pm nowhere to be seen. What do the forecasters know?

Unfortunately quite a lot, their only issue was timing! I think it was at approximately midnight when torrential rain and gale force winds arrived. We suffered 3 or 4 tents flooded, several damaged and students sleeping on the floor in the mess tent. One of which was the much hyped Odell-Rourke, Kyndt, McInally, Dalton and co 12 man spaceship tent, with a small river running through the centre of the tent a retreat to the mess tent was their only option. This was the first night of four! What a start!

Fortunately the weather did improve and apart from the wind, conditions were perfect for walking. This year’s walk was slightly different to last years in that we walked the last three legs of the south west coastal path www.southwestcoastpath.com a total distance of just over 40 miles. The distance doesn’t really do justice to the challenge that the group faced.

Day one started in drizzly on the Weymouth sea front fortunately weather conditions improved and lunch time at the Smugglers Inn was again excellent. The second leg of day 1 saw climbing some serious terrain with spectacular views of the Dorest coastline finishing at Lulworth cove passing Durdle Door on the way. What a great way to start the 3 days of walking. Durdle Door ahead!

Day 2 of the walk was from Lulworth Cove to Worth Matravers a distance of 14 miles. According to the coast path website it is described as ‘an isolated stretch of the path which offers some spectacular views, but be prepared for some difficult walking right from the beginning’. Difficult walking couldn’t be more of an understatement! Last year we unfortunately spent the majority of this leg in the cloud cover seeing virtually nothing of the views. Luckily this year the sky was clear and the views were absolutely incredible. The highest climb being the climb to Houns-tout Cliff, which stands at 490 feet (150 m) above sea level. Adding to the difficulty of this climb was the fact that this was the last climb of the day, 13.5 miles into the days walking! Day two proved to be a serious test for everybody involved and by far the most challenging of the 3 days. The day finished perfectly as the sun came out for our BBQ at the campsite. The staff firmly rooted to their respective chairs, the students unbelievably charging around playing football!

Day 3 started at Worth Matravers  passing Durlston Head through the seaside resort of Swanage and on to Sandbacks in Poole harbour. This was the first time as a group this leg had been walked. The weather for day 3 was fantastic with blue skies and sunshine. The addition to this part of the walk was without doubt a major success. As we reach Swanage the walk directs you along the promenade. As the weather was so beautiful the promenade was packed with holiday makers. As a group we decided to work their way along the seafront asking for donations for our cause. In the 20 minute period we managed to raise £250 in donations.

The last mile of the walk took us along the beach to our finishing point. With blue skies and bright sunshine another very successful walk was drawing to a close. If the projected amount of money is raised this year. In 2 years we will have managed to  raise just over £16,000.

As with these types of events there is a considerable amount of effort that goes into its organisation. Which means I am personally indebted to several people and companies without whose support the event wouldn’t even happen. A massive thank you goes to Tony McInally, Tony is our Chef at the campsite and manages to cater for the 60 people without breaking sweat. He also spends a considerable amount of time assisting me making sure we are fully organised during the planning stages.

The PE department also played their part with the event and I am again thankful for their support and enthusiasm.

My biggest thanks of all goes to the students who were involved, without them there would be no event. They were again outstanding and it was a pleasure to share the experience with them.

Next year’s walk is already being planned. We are hoping this year to involve 4 schools. The target is to achieve the number of students walking to exceed one hundred students.