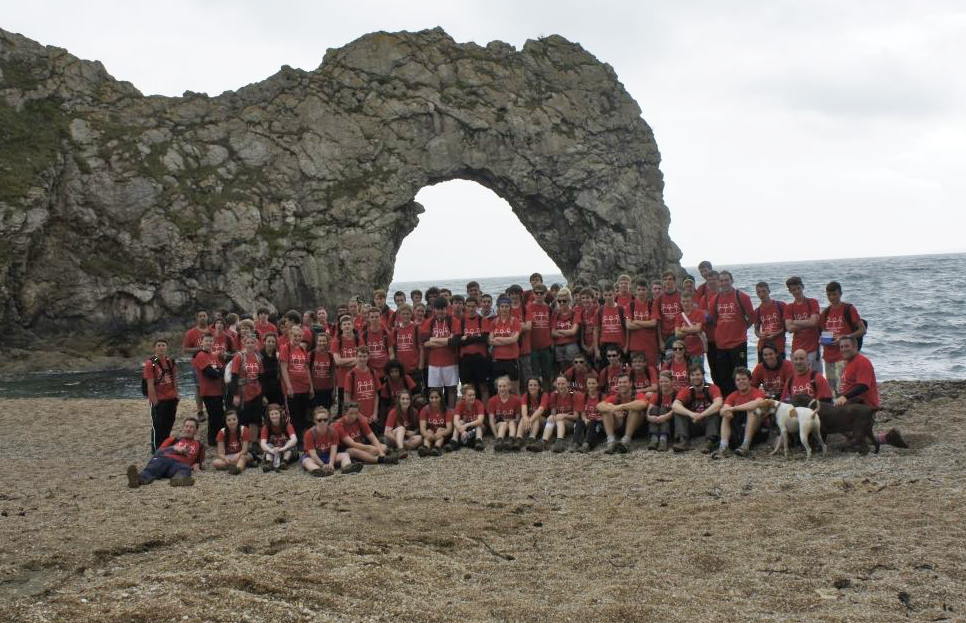 In true British fashion I will begin by discussing the weather. This time however there are virtually no complaints. If you are looking for a grumble then perhaps the only thing you could say is that it might have been too hot!

We decided to create the charity and in  doing so decided that we wanted to support other cancer causes other than just bowel cancer. We decided that it seemed appropriate to have a charity that rasied money via school students, supporting children that had been touched by cancer.

So we had changed our identity and we where heading for Dorset to complete our 4th sponsored walk. This year we had grown significantly and we managed to get 3 other schools to come along and join us. This meant we had just under 100 walkers heading down to walk the coastal path.

As has been the case every year so far we left Ely in bright sunshine. As we approached Dorset the sky had darkened and the rain clouds were gathering! Mr ‘the tool’ Coe directed us to the cross channel ferry and Calais! Once we had corrected our directions we arrived at Burnbake campsite in rural Dorset just outside Corfe Castle. How lovely, NOT! If i was able to use swear words in this piece then there would be many! The weather was shocking, horixontal rain, cold and mud was the order of the day! Putting up tents in lying water is something i ever want to repeat. The mood in the camp was not good, worse still we had only just arrived!

This was not going to be a great year! And it wasn’t!

• Flooded paths and wet feet.
• Flooded campsite with pallets on the ground as stepping stones.
• Tony cooking in the back of the transit as it was the only dry place on the campsite.
• Some painfully slow walkers!
• Cold and wet camping conditions

Then when things couldn’t get any worse, my wife falls from her horse and breaks 8 ribs. (the end of my walk, home time)

With me leaving no minibus driver! (thanks Milken who sent a coach down to pick up the students)

In spite of these set backs the walk was another success. Students and staff overcame some horrific conditions and completed the walk. There was even a shinny thing in the sky as the walk concluded at Studland! We raised a large sum of money for an incredible cause. Charity events are supposed to be challenging and this was very!

Most impressively, we have now raised in excess of £50,000! Thanks as always to everybody that supported and sponsored us! This year we did deserve it.

If we have the same weather next year. There will be no Dorset 2014 I PROMISE!!