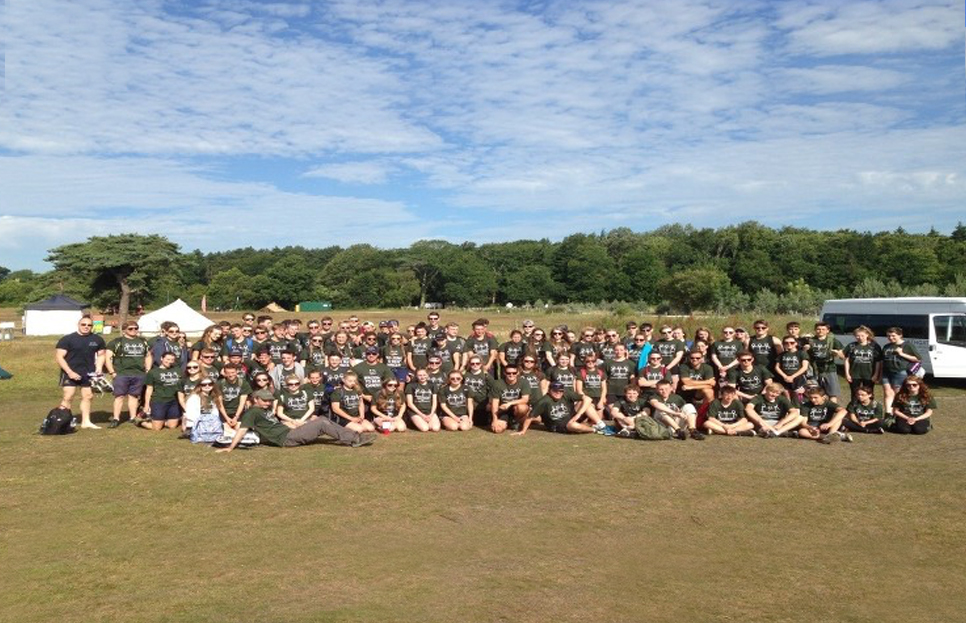 As ever with the walk, the big match is ‘the event’ v’s ‘the weather’. This year we will call it a draw!

This year saw a record number of walkers; Ely College, Prince William Oundle and Rushmoor Bedford combined efforts to put 120 pairs of feet along 40 miles of the Dorset coastline. As we set off the total raised had reached £80,000. The hope for this year is to raise enough to break the £100,000 barrier!

We arrived at our campsite in Corfe Castle in glorious sunshine, spirits were high. Largely down to the fact that students again had the privilege of listening to the teacher’s music for 4 hours! Tents went up quickly and in the main, fairly successfully. There was the obligatory 12 man spaceship tent with none of the 12 capable of putting the tent up! An interesting option was taken by the year 11 boys/muppets, they went with the poles and inner tent option. The waterproof part deemed an unnecessary extra!

We started day 1 in perfect sunshine on Weymouth sea front. The walking was very fantastic for the first two days. The hills were still very steep, the steps were definitely still there, the views as stunning as ever and the challenge became very clear to all the new recruits.

Day three was a little different as the day arrived with a large amount of wet sunshine! Although it rained for the majority of the day, most people (and definitely Oscar) welcomed the cooler temperature. The biggest disappointment of the day was that due to the poor weather, Swanage and Sandbanks were deserted. On a sunny day the promenade and beach normally provides us hundreds of donations. That said, as we completed the sprint finish down the beach, the shared feelings of success and achievement, were again obvious for all to see.

As ever there were a number of highlights to the walk, these included:

• The year 11 boys finding out that the waterproof part of their tent is a necessity particularly when it rains. The minibus did look comfortable!

• Tony was again a legend, in his catering for 120 people!
• Mr Coe was the slip catch champion, battering Mr Bradley!
• Cal’s teenage hormones! His desperate chasing of any female that was unfortunate enough to be near him in Swanage!
• Disappointingly, yet again Miss King brought her sexism with her. The boys to their credit seemed to cope and were unaffected by the lack of support and encouragement they received.

As the organiser of the trip, I would like to thank everybody who took part. I honestly think that the group of students were fantastically well behaved and it really was a fantastic trip! I hope more than anything that next year’s walk happens without any difficulty. The trip remains a huge success that provides such a valuable experience for all. Long may it continue!

Thanks for everybody’s support!