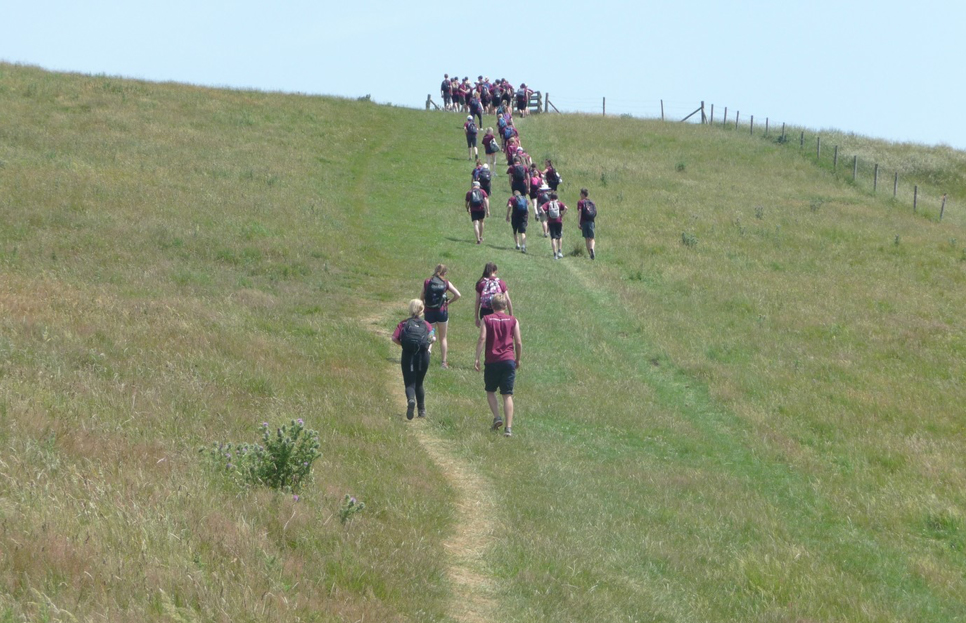 In true British fashion I will begin by discussing the weather. This time however there are virtually no complaints. If you are looking for a grumble then perhaps the only thing you could say is that it might have been too hot!

Unfortunately there were only two schools that made it this year, Ely College and Prince William School Oundle. The staff were again ready to go with the usual checking of the weather every 30 seconds for the entire previous month! This year we also welcomed the Art department with Mrs Chacksfield and Mrs McClellan joining the team!

The journey began in high spirits. The weather was perfect with the students excited, in particular those on the Mr Whales bus who were eagerly awaiting his iPod education! Their attempts to mask their excitement and enjoyment through constant moaning fooled no one. The performance of ‘heads, shoulders, knees and toes’ a particular highlight.

The journey down was eventful to say the least with a very serious accident narrowly avoided on the M25, as a car and caravan swerved across all three lanes smashing into the central reservation just ahead of the bus. Fortunately the driver was not seriously injured and no other cars hit the car or caravan. Reports that the driver had heard Marley’s dreadful music and attempted to harm himself and others proved to be only rumours. In fact had he have been put through the pain he would have been driving a lot faster! The only other concern on the drive down was the deterioration in fuel consumption in the support van with Mr Walters and Mr Bradley on board. The problem was put down to an attempt by both to eat their own body weight in Burger King.

The arrival at the campsite this year was also a very different experience. I can now confirm that there is no permanent lake on which you have to erect the tents and that the camping area is actually mainly grass! The new mess tents created a sense that we were beginning to get the hang of this camping thing!

The walk in blistering heat was a real challenge. Bags were heavily laden with litres of water and sun cream. As always blisters began to appear and the students began to realise quite the challenge they had taken on! However as occurs each year the students dug in and across the 3 days really did themselves proud. There were minor details to contend with like major parts of the coastal path lying in the English Channel and the enormous inland detour that we had to take in 30C+ temperatures due to path closures. At the end of day 2 in particular there were some seriously red faces and the sight of horizontal bodies in the shade waiting for the buses was a lasting memory of quite how hard the day had been. There is also a picture of Miss Knott looking like the living dead that can be shared!

Other highlights were the blood blister on Georgia Littlefield’s foot that was the actual size of her foot and the hysteria around what to do with it! There were the normal love interests that occur across the different schools, no names mentioned. (Goddard). The obvious and necessary plaudits for Tony and Lorraine who keep the whole thing together!  Big thanks to the staff that drove down on Friday night to support the walk. In particular to Mr Collard who brought the biggest pair of feet even seen by a man only 5ft 6in tall. Also I think I should as always mention my hatred for camping, as although the daytime temperatures where in the mid 30’s the night time temperatures managed to drop to what felt like sub-zero temperatures. Why anybody would go camping for pleasure remains to me one of life’s mysteries!

As with all stories there tends to be something that ruins it for everybody. That something was in fact somebody ‘Scott Callaghan’ ruining the whole walk. Whilst taking part in the annual staff v’s students cricket match. Rather than doing the right thing and waiting until Mr Whales was ready. Scott bowled Mr Whales before he was ready and dismissed him first ball. Scott then brought the game into disrupt by inciting a large number of teenage boys to chase Mr Whales around the campsite and systematically physically and psychologically bully the innocent kind hearted teacher.

It was without question the best year we have had. We are currently receiving the sponsor money and we look forward to seeing how much money we manage to raise.

Thanks as always to all the staff, the covering the staff at school, Tony and Lorraine, the sponsors and the students. (except Scott)