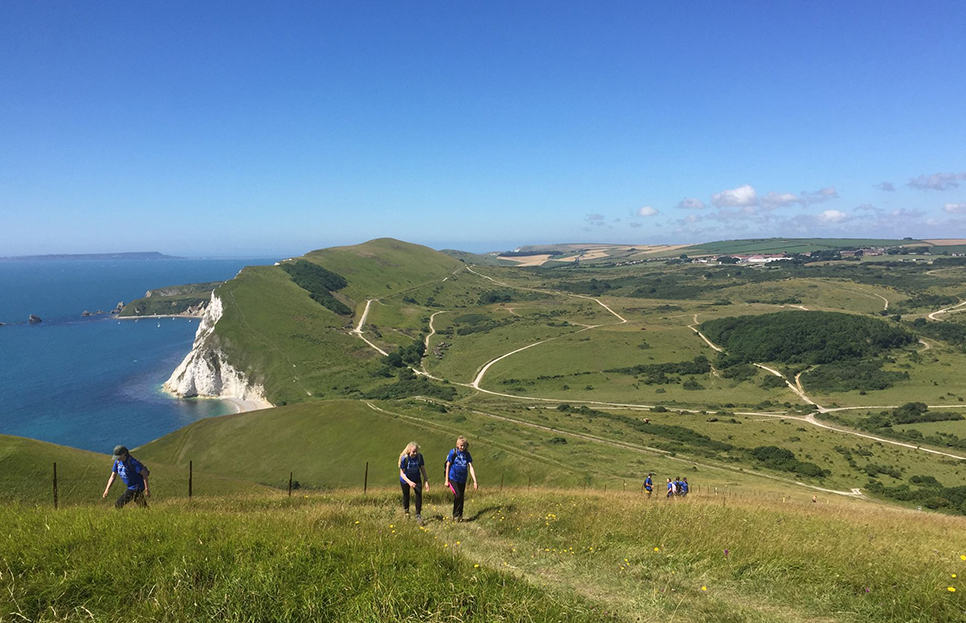 Dorset 2016 – was the walk that could ‘never have been’. Unfortunately, due to some short sightedness in important areas, we very nearly didn’t get off the ground. The term time ban and the lack of school support posed the team some fairly big problems.

The date which had worked so well was no longer a possibility, meaning we had to take the walk into the summer holidays. This created many issues, as during the holidays, people tend to go on holiday! Unfortunately, as expected, this was the case for a huge proportion of participants.

We decided to choose dates in early August. This meant the majority of the staff that had attended previously couldn’t this year and only about 50% of the students take up was achieved – gutted!

However, despite our obvious anger and disappointment, we pushed as hard as we could to keep the event standing! In spite of the problems, an impressive 65 participants signed up to the walk. We also attracted people from outside of education. This included a number of participants from RAF Wyton, several  families, members of ‘Climbing Out’ one of our partner charities, ex-students (bordering on becoming adults), the ‘the veteran mud runner’ (with the hulk as his profile picture) and several others. 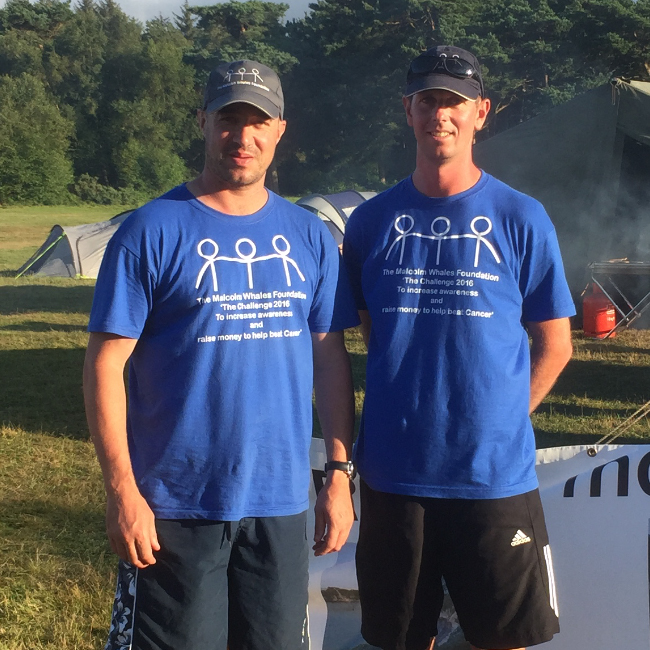 Honestly and without exaggeration this year has to be the best walk yet. Involving people from the wider community added so much. The walk is so stunningly beautiful, whilst presenting a serious physical challenge. It meant a further endorsement to the strength of the event. The feedback, not just the students has been an amazing shot of positivity. We really do have a top class event that provides an individual and a team challenge, it brings together people for a common cause and in addition, people really enjoy it. I love to hear the conversations of, ‘I can’t wait until next year’ and ‘I am definitely coming again’. How this is achieved through a walk along the coastline and sleeping in tents, remains an intriguing question for me! 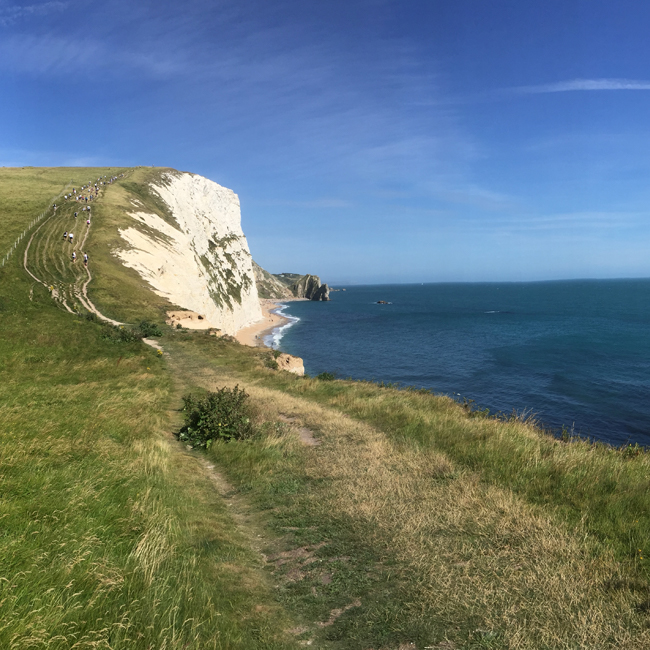 Dorset 2016 was different for a number of reasons. The travel being one of them, normally we travel down on minibuses. This year however we travelled down in style – Greys of Ely provided one of their top class coaches. Richard Grey even driving us down himself! No wonder he was talking all the way to Dorset about his ‘coach driver of the year award’. After the stop at the services, lasting approximately half the time, and from their perspective, Burger King will have seen a serious slump in annual profits, due to Mr Bradley’s unavailability through holiday.  We arrived to Burnbake to glorious sunshine, the best camp field and with perhaps enough wind to make tent construction a little challenging – particularly if you don’t bring tent pegs or you allow Lorraine to try and put one up for you.

Other challenges that we were presented with were: Tony was needed at work Saturday and Sunday. The solution, Tony drove down Thursday to feed us Thursday and Friday night, before driving back at 4.30am Saturday morning to be at work! As ever Tony remains just a little bit committed to the cause!

The walk started as ever on Weymouth seafront – which coincided with operation ‘release team Mathews’. The Mathews family, from Huntingdon rugby club, joined us for the first time and were responsible for a number of bankruptcies to Dorest holidaymakers. Without exaggeration, and including their justgiving site, they have been responsible for raising somewhere in the region of £1000 alone (Many thanks, I really appreciated your support). On a personal level, as the event is in memory of my father, I normally get a little emotional. But for the first year, my eldest son Ethan took part. Walking down the Weymouth seafront beside my son, wearing his walk t-shirt, has to be one of the proudest moments of my life to date. My hat and sunglasses hid the emotional wreck, very effectively – I think!

As ever day 1 consists of the ‘you wait until after lunch’ conversations from those who have participated before. With constant questions of ‘how hard is tomorrow’? Weather wise, I honestly don’t think it could have been any better. Each day provided us with blue skies and no rain at all. The mist on the morning of day 3 provided a welcome break from the heat. Before appearing, to make the last half of the walk blue skied and perfect for the sprint finish. Due to the fantastic weather conditions not only was the walking perfect. Itmeant that most of the population of the UK were on holiday between Weymouth and Poole. Representing ideal conditions for bucket donations, meaning by the end of the 3 days we had managed to collect a small fortune.

Days 2 and 3 were again pretty much ‘perfect’, the scenery was stunning, with blue skies and red faces it couldn’t have been better. To the uninitiated the terrain presents quite a challenge. Although this year more than ever it seemed to be nicely broken up by ‘ice cream’ each time we ventured near civilisation.

Other things of note from this year:

• The military are often known for their organisation and time keeping. I can confirm that without very clear ‘orders’ they are in fact useless (Unless ordering food at every single opportunity, is part of their basic training).
• Owen Buxton again suffered at the hands of the catching circle and on the first night had to go and have some ‘Owen time’, much to my delight.
• AJ Curtis demonstrating that his boyish charms and manners could cause quite a stir for the younger female walkers, fortunately Mr Whales was able to play down any unfortunate embarrassment!
• Mr Popp was tormented by the year 11 boys. Resulting in him coming to me and asking for my assistance. Obviously due to his Welsh origin, he was swiftly turned away.

The travel home was as ever almost silent with the majority of people sleeping and dreaming of the comfort of their own beds. As we were approaching Cambridgeshire, I asked Richard Grey when he would like some money for the coach. His response ‘I don’t want any, it’s on us’. An amazingly generous donation reducing a normally massive overheard.

On reflection, the difficulties and bizarre decision making from the school, actually may have helped make the event stronger. The walk dates are now back where they were. We should at least double the number of walkers this year. I for one cannot wait until 13th July, 2017. 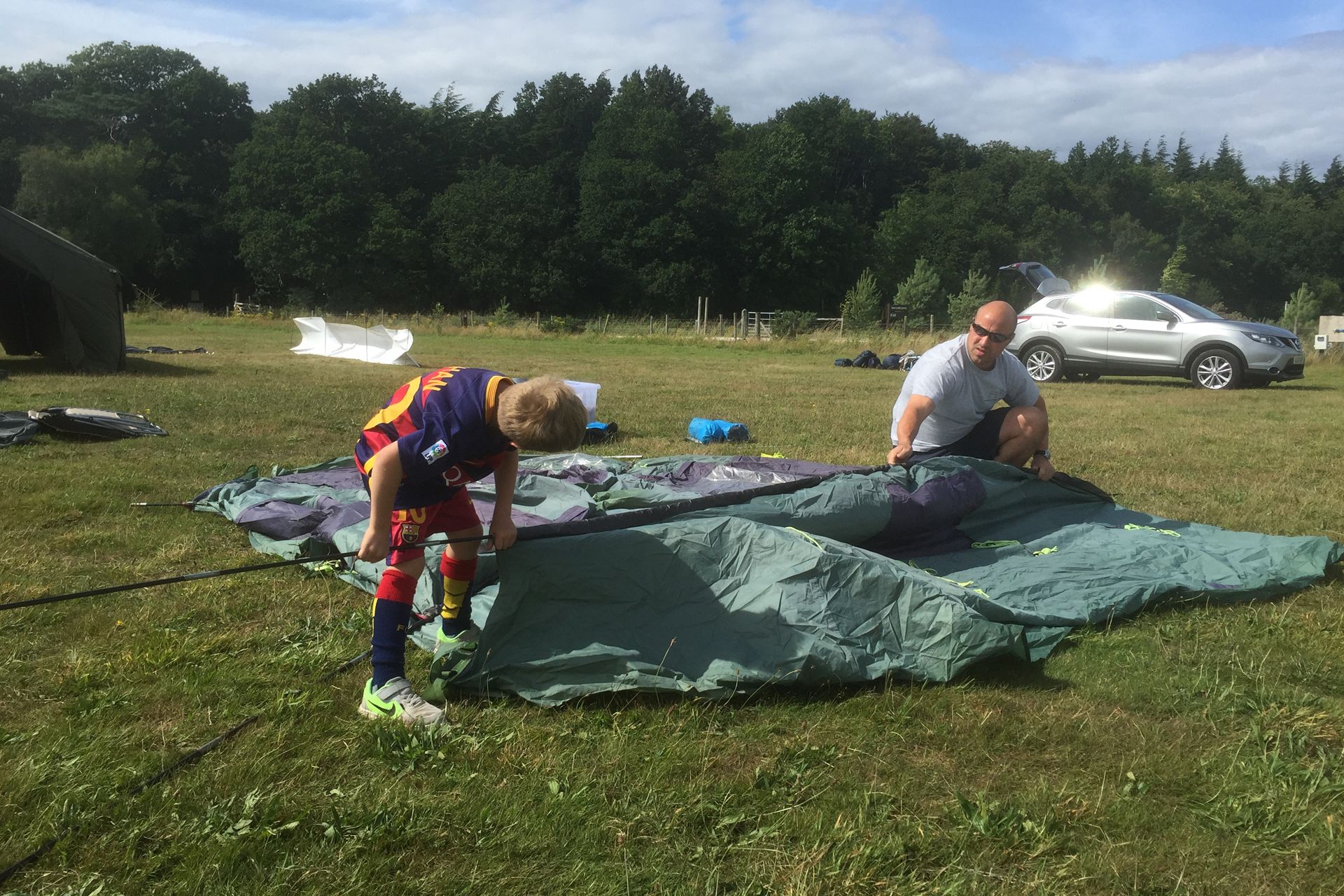 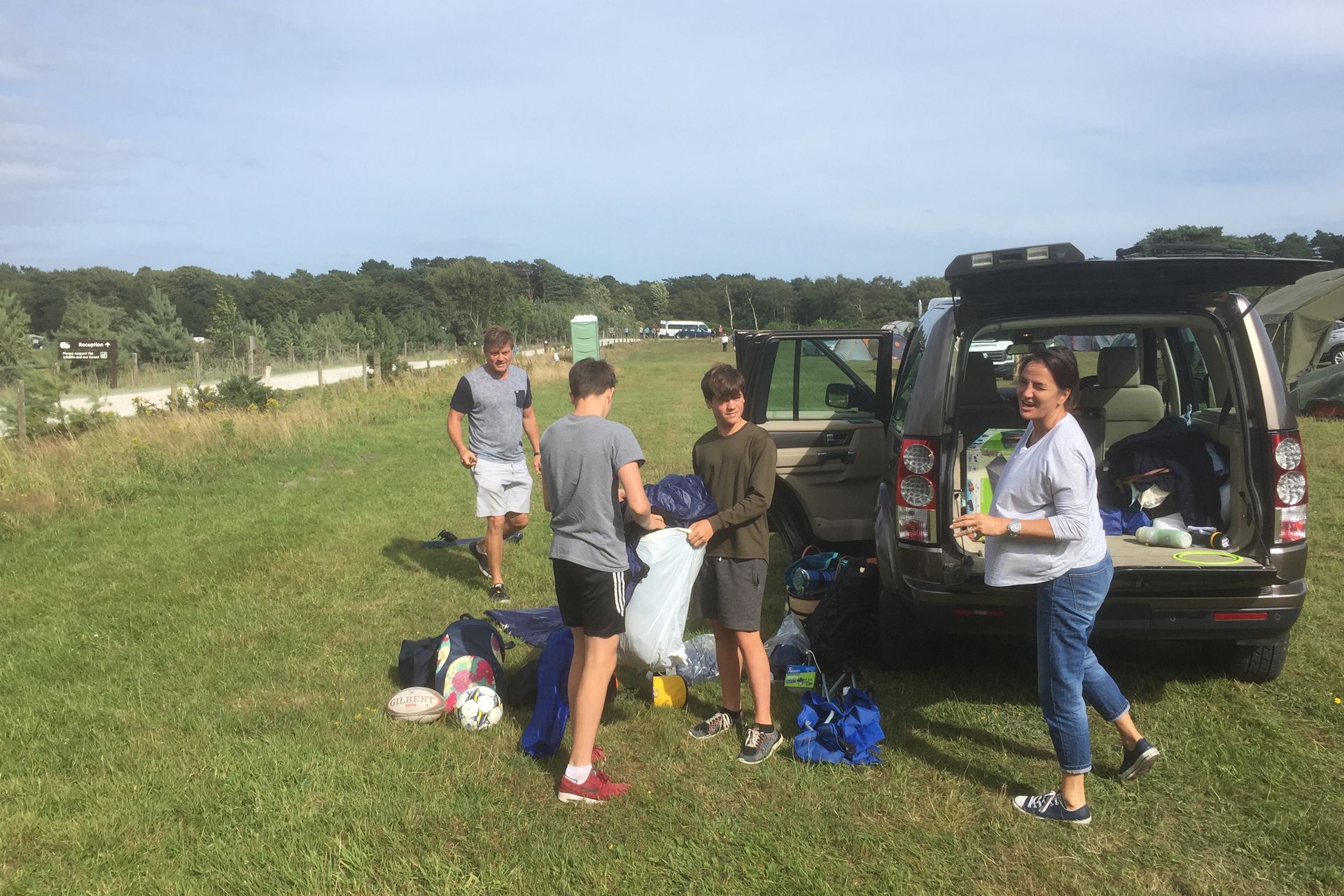 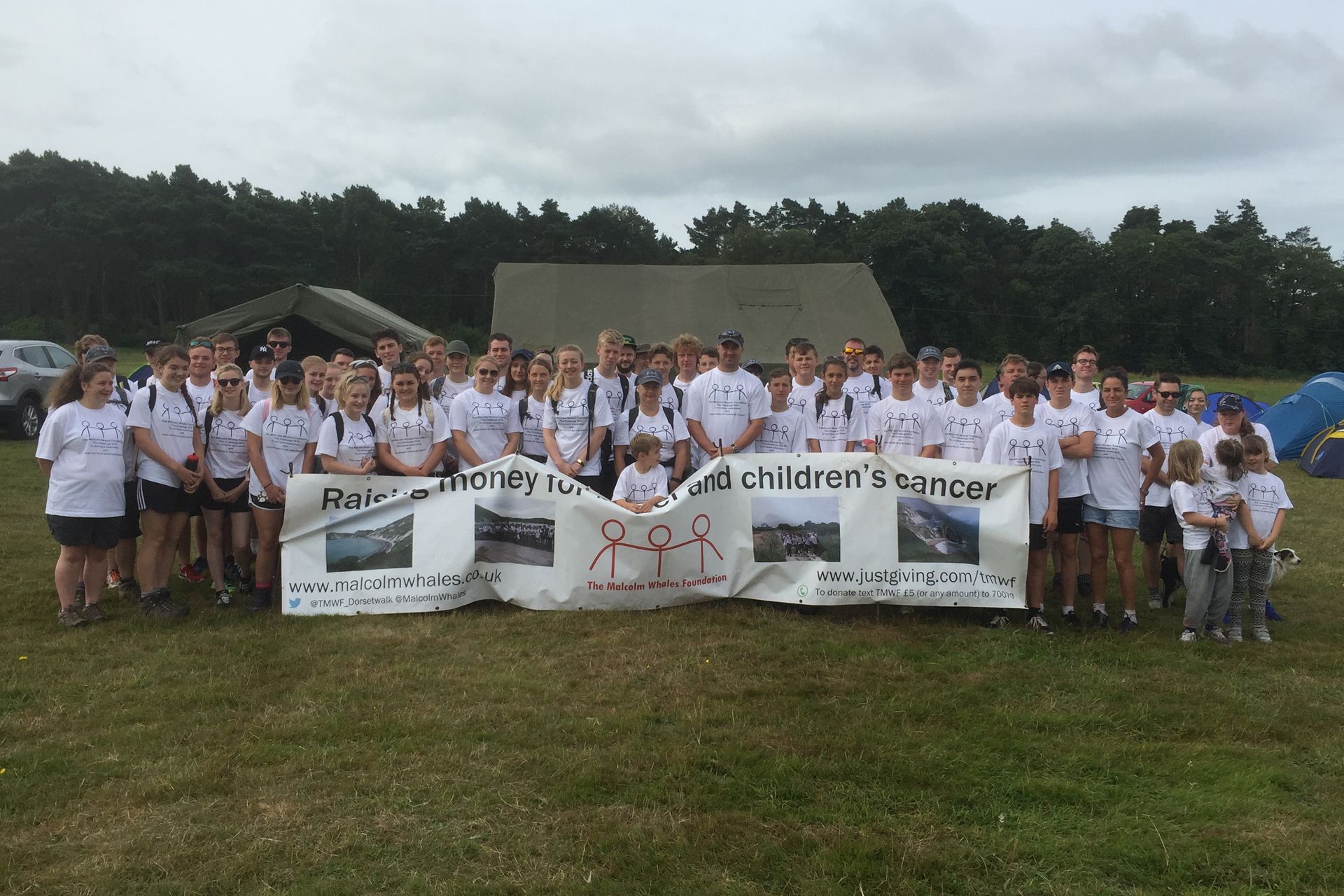 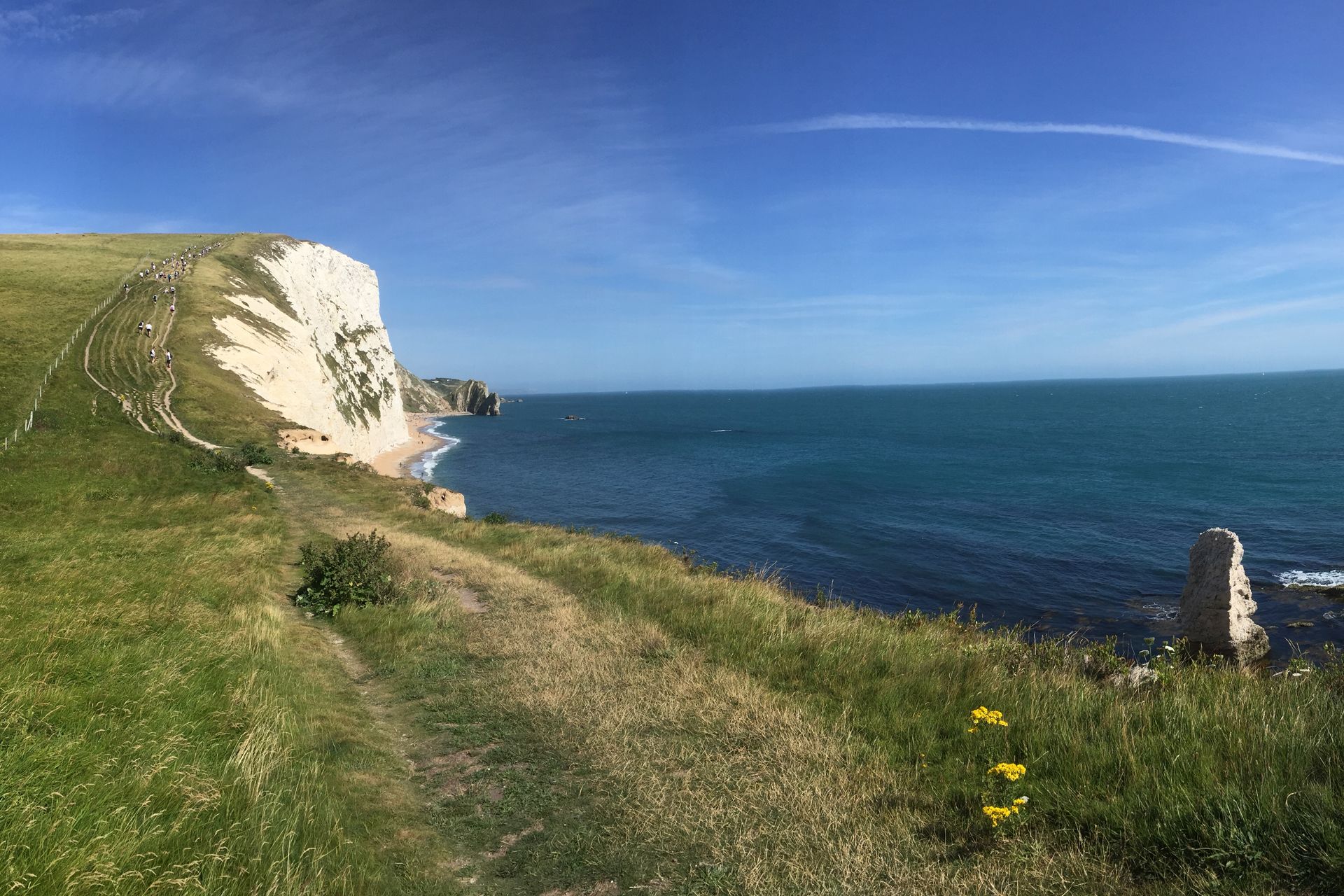 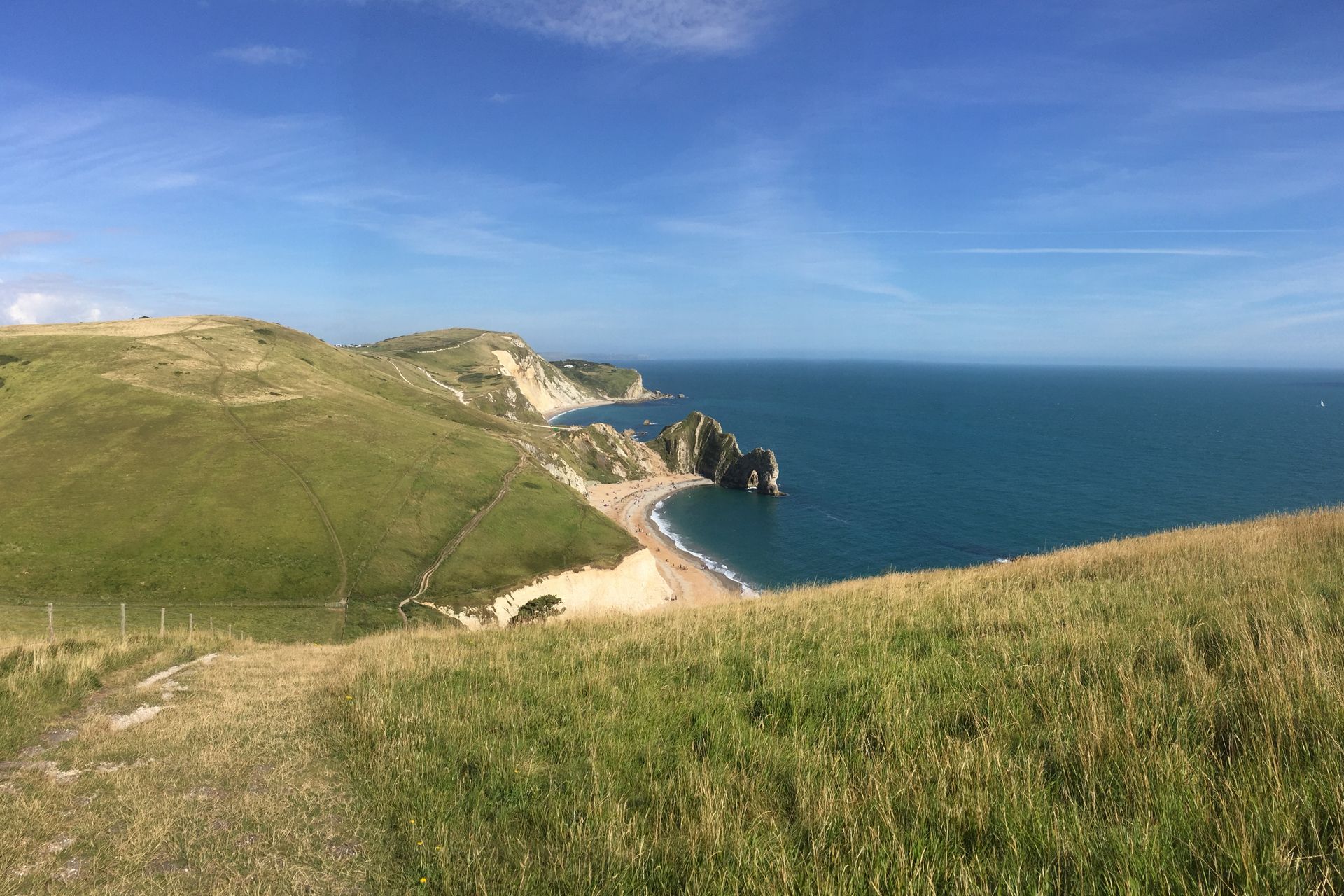 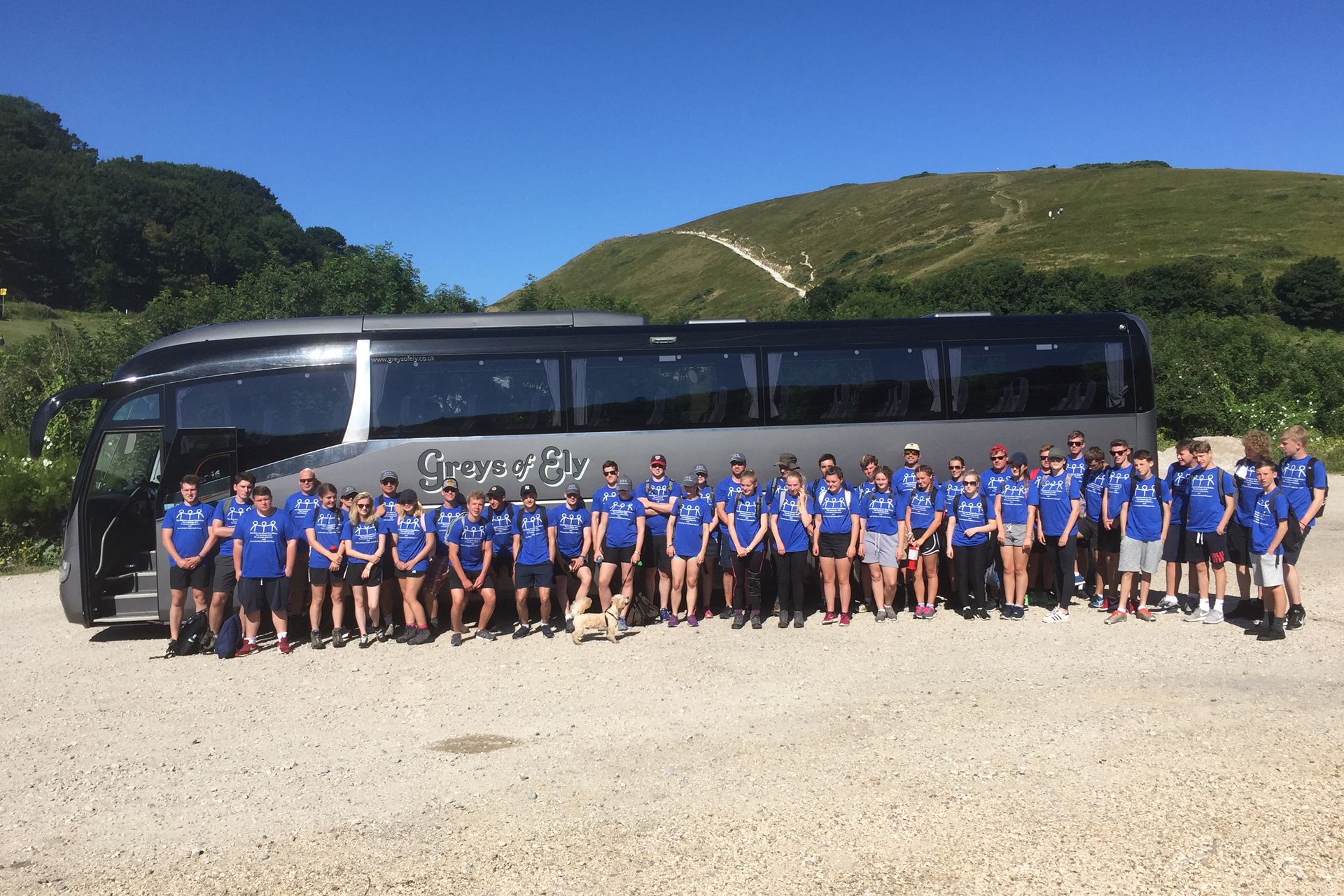 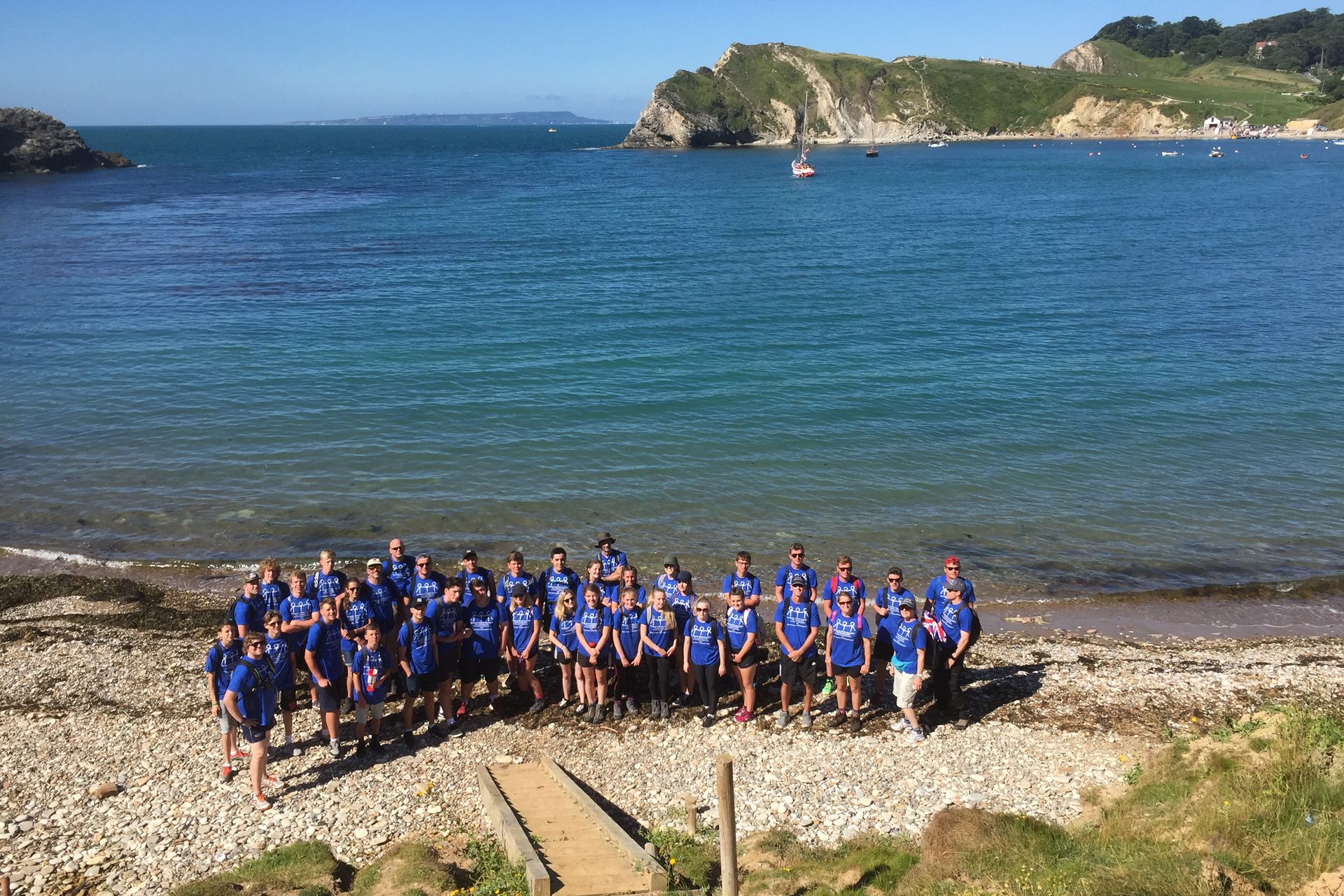 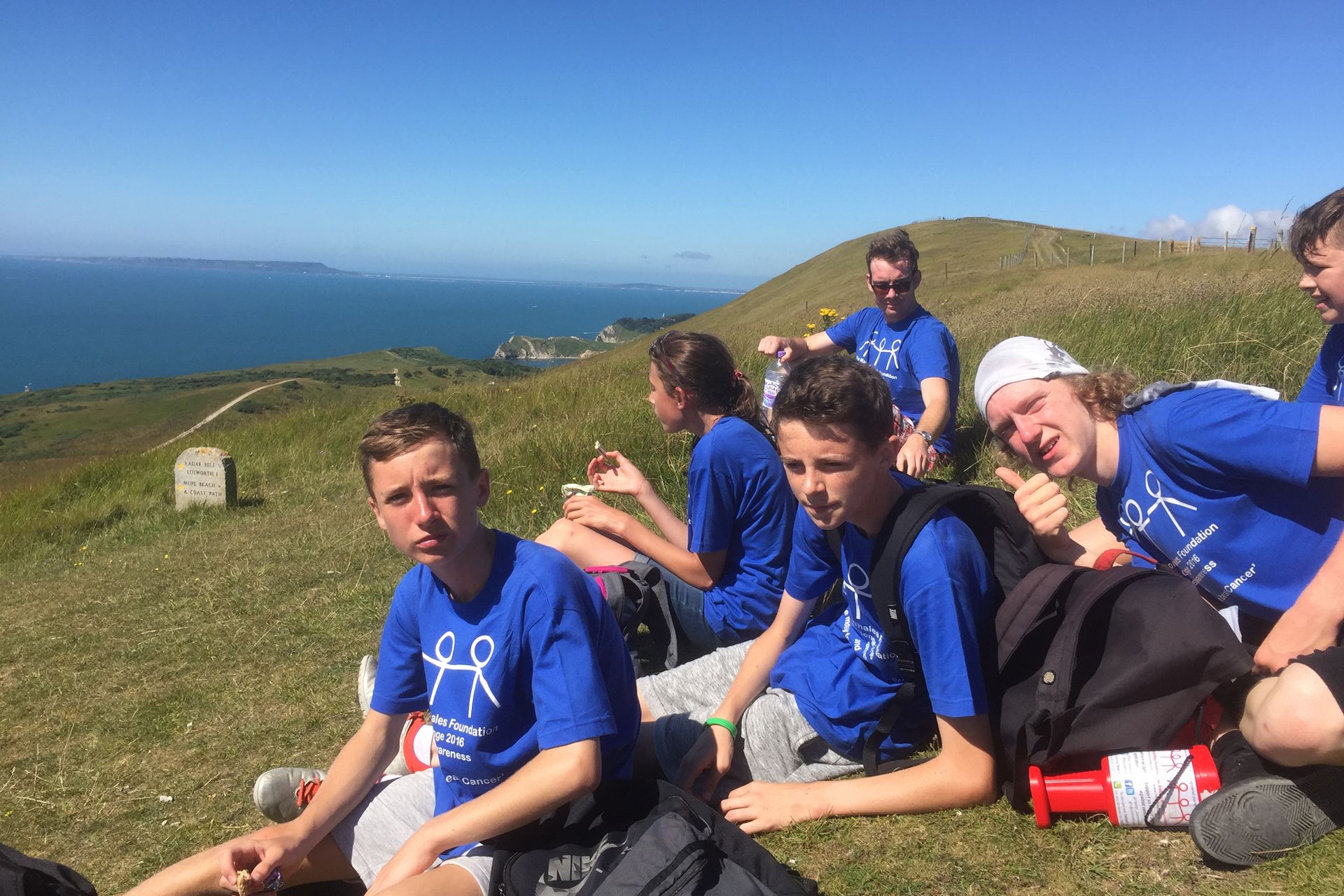 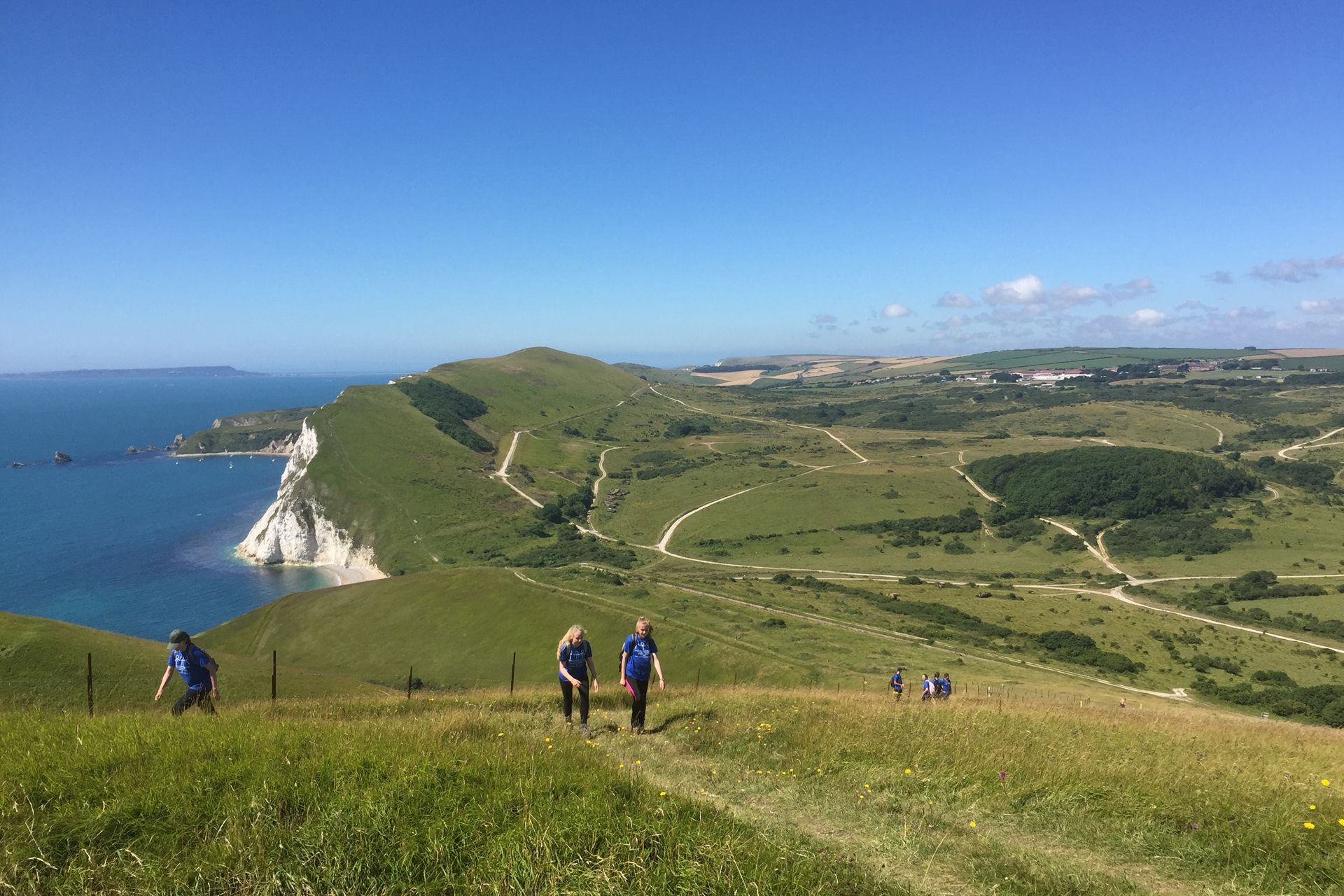 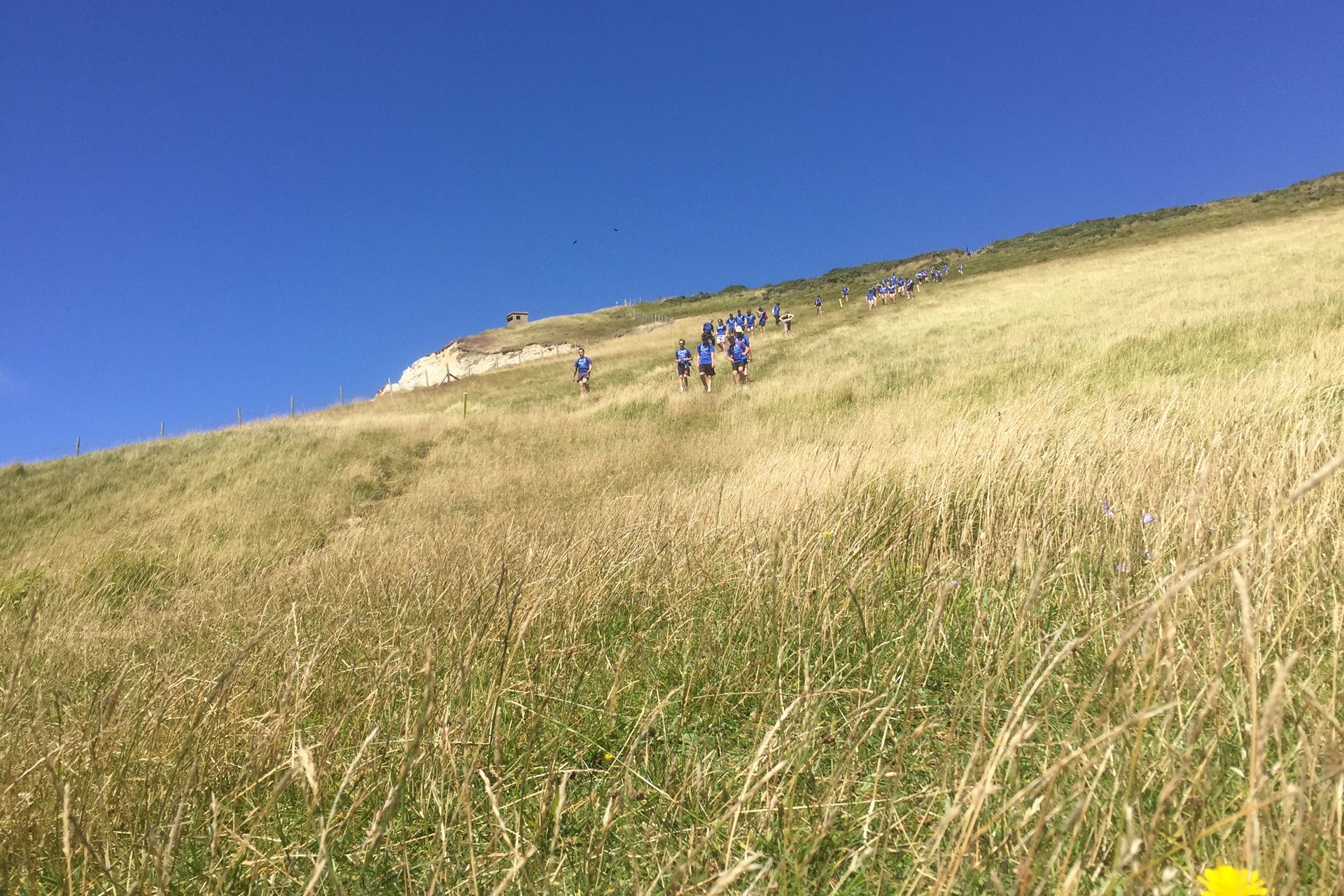 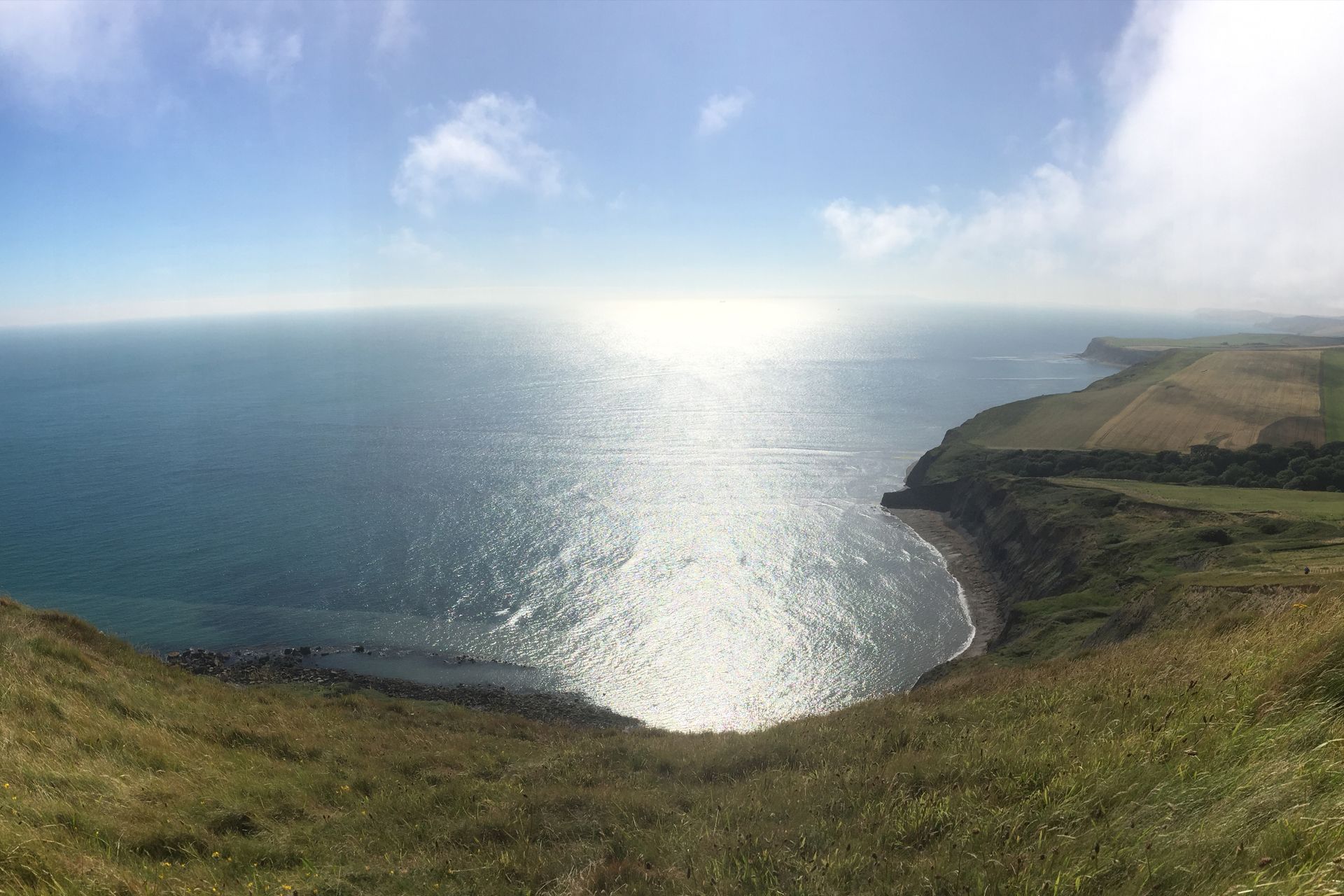 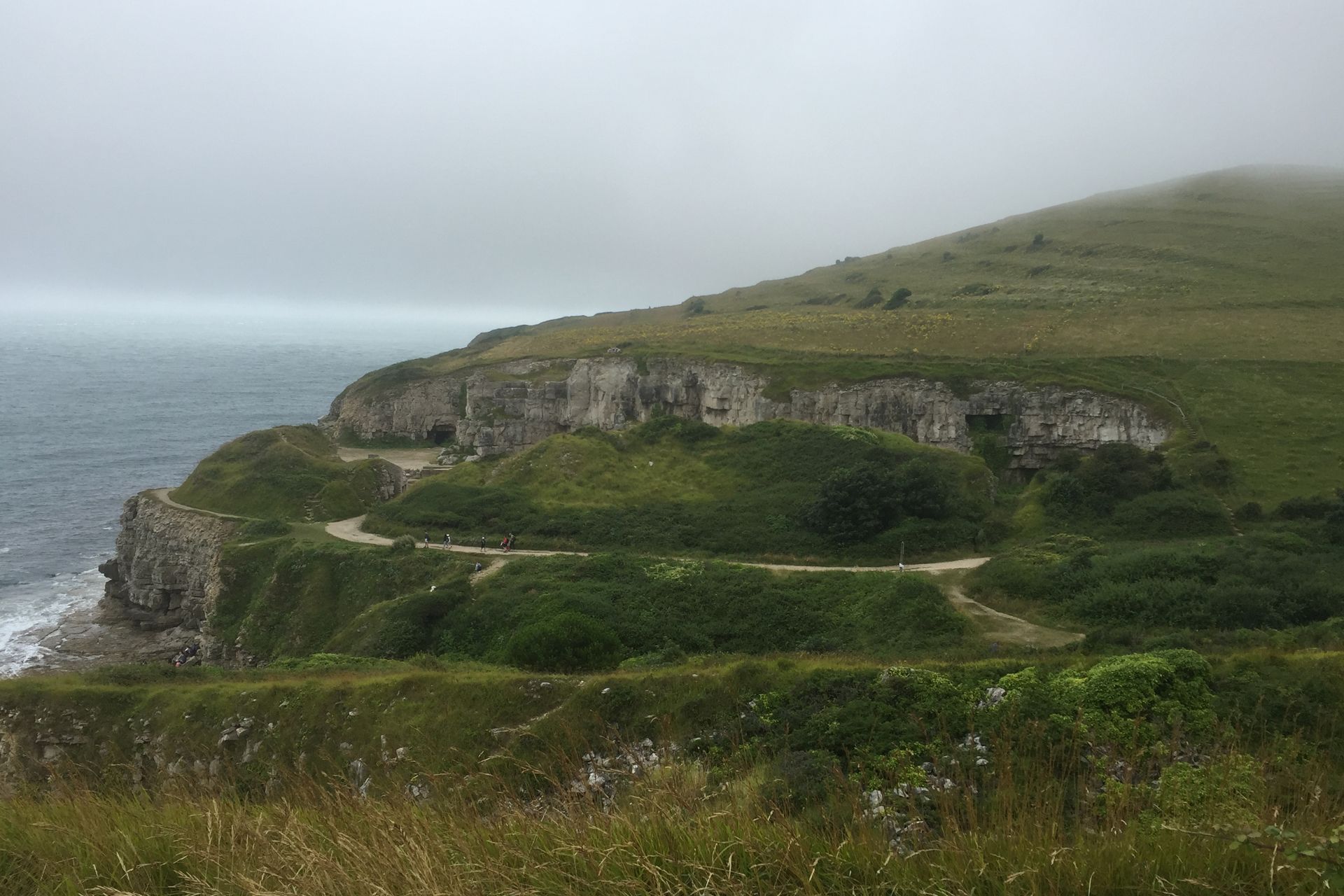 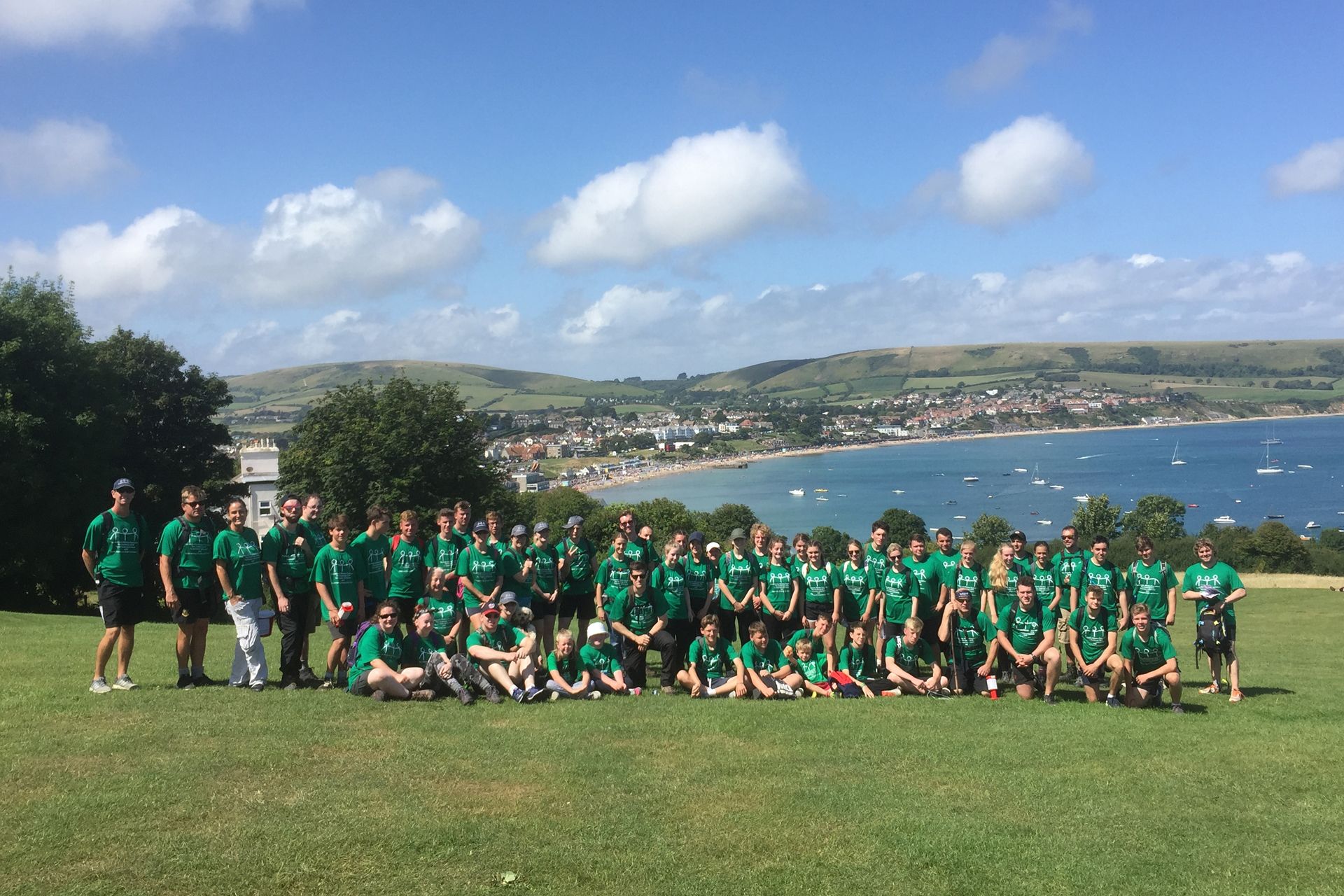 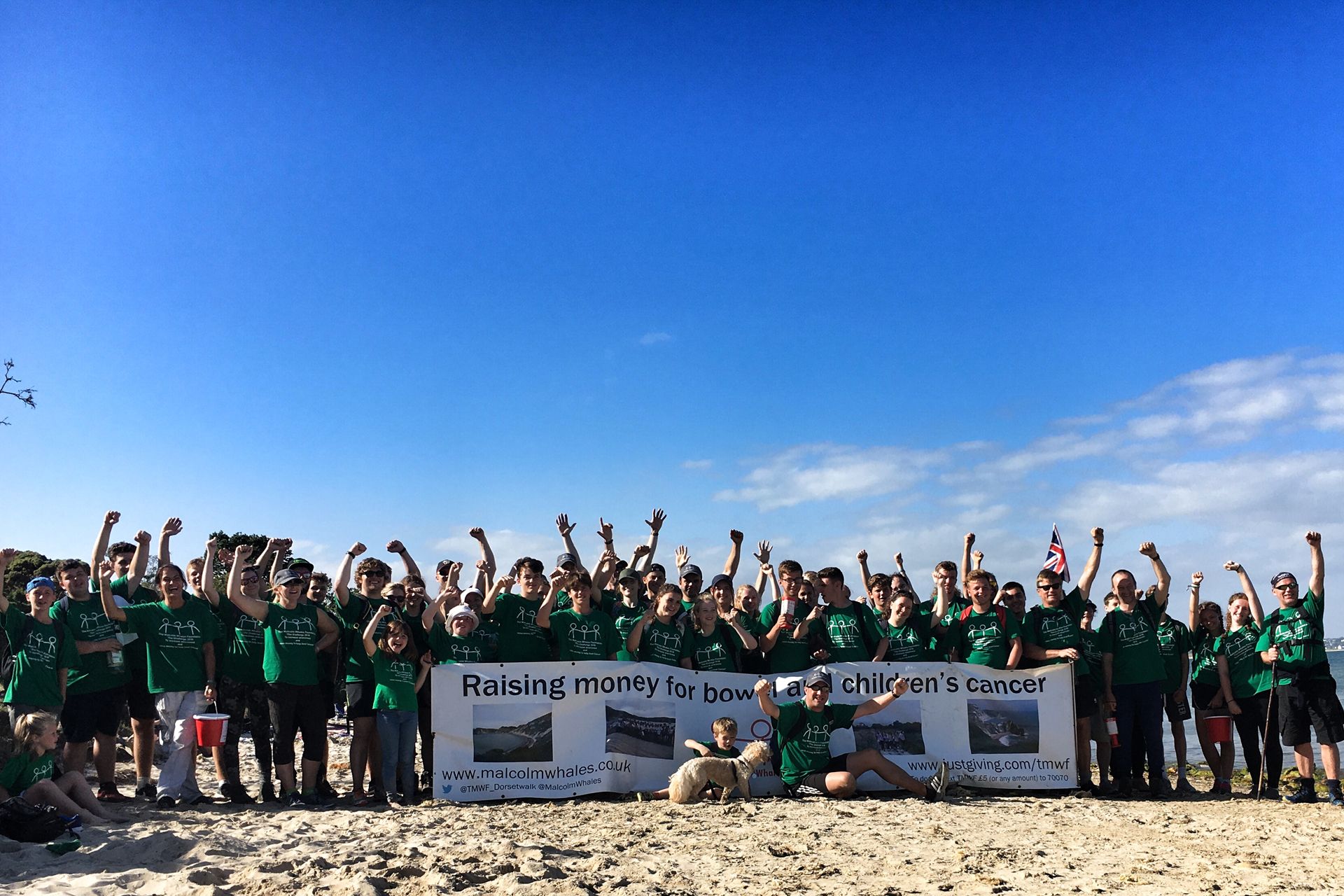